Posted by Sai Teja Peddinti, Nina Taft and Igor Bilogrevic from PDPO Applied Privacy Research, and Pauline Anthonysamy from Android Security and Privacy.
User trust is critical to the success of developers of every size. On the Google Play Store, we aim to help developers boost the trust of their users, by surfacing signals in the Developer Console about how to improve their privacy posture. Towards this aim, we surface a message to developers when we think their app is asking for permission that is likely unnecessary.
This is important because numerous studies have shown that user trust can be affected when the purpose of a permission is not clear.1 In addition, research has shown that when users are given a choice between similar apps, and one of them requests fewer permissions than the other, they choose the app with fewer permissions.2
Determining whether or not a permission request is necessary can be challenging. Android developers request permissions in their apps for many reasons – some related to core functionality, and others related to personalization, testing, advertising, and other factors. To do this, we identify a peer set of apps with similar functionality and compare a developer’s permission requests to that of their peers. If a very large percentage of these similar apps are not asking for a permission, and the developer is, we then let the developer know that their permission request is unusual compared to their peers. Our determination of the peer set is more involved than simply using Play Store categories. Our algorithm combines multiple signals that feed Natural Language Processing (NLP) and deep learning technology to determine this set. A full explanation of our method is outlined in our recent publication, entitled “Reducing Permissions Requests in Mobile Apps” that appeared in the Internet Measurement Conference (IMC) in October 2019.3 (Note that the threshold for surfacing the warning signal, as stated in this paper, is subject to change.)
We surface this information to developers in the Play Console and we let the developer make the final call as to whether or not the permission is truly necessary. It is possible that the developer has a feature unlike all of its peers. Once a developer removes a permission, they won’t see the warning any longer. Note that the warning is based on our computation of the set of peer apps similar to the developers. This is an evolving set, frequently recomputed, so the message may go away if there is an underlying change to the set of peers apps and their behavior. Similarly, even if a developer is not currently seeing a warning about a permission, they might in the future if the underlying peer set and its behavior changes. An example warning is depicted below. 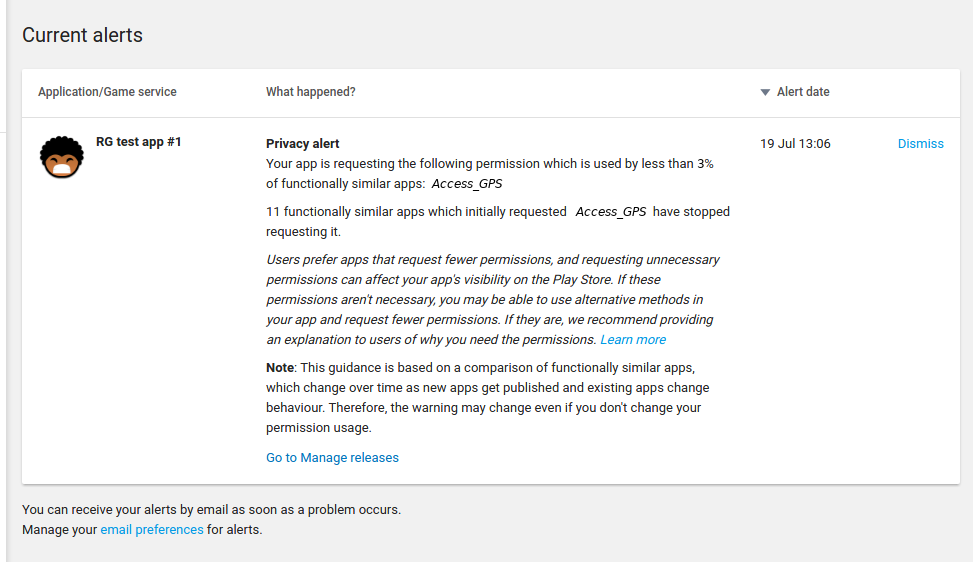 This warning also helps to remind developers that they are not obligated to include all of the permission requests occurring within the libraries they include inside their apps. We are pleased to say that in the first year after deployment of this advice signal nearly 60% of warned apps removed permissions. Moreover, this occurred across all Play Store categories and all app popularity levels. The breadth of this developer response impacted over 55 billion app installs.3 This warning is one component of Google’s larger strategy to help protect users and help developers achieve good security and privacy practices, such as Project Strobe, our guidelines on permissions best practices, and our requirements around safe traffic handling.
Acknowledgements
Giles Hogben, Android Play Dashboard and Pre-Launch Report teams