Analyst firm Gartner recently published a report titled, “Implement a Risk-Based Approach to Vulnerability Management.” It focused on a risk-based approach for a vulnerability management process and includes several statements and recommendations that our X-Force Red team strongly supports. Some of them include:

How Can Security Teams Optimize the Vulnerability Management Process?

X-Force Red built X-Force Red Vulnerability Management Services (VMS) with these same methodologies in mind. One of the biggest challenges plaguing security teams worldwide is figuring out which vulnerabilities, out of hundreds of thousands that are uncovered daily, to remediate first.

With limited time and resources, security teams manually sift through each vulnerability, trying to decipher which one could cause the most harm to their organization. Many have relied on the Common Vulnerability Scoring System (CVSS), but those scores do not factor in the importance of an exposed asset, or whether the vulnerability is actively weaponized by criminals.

As a result, security teams often waste time following up on false positives and minimal risk vulnerabilities, while the most dangerous ones remained unpatched. 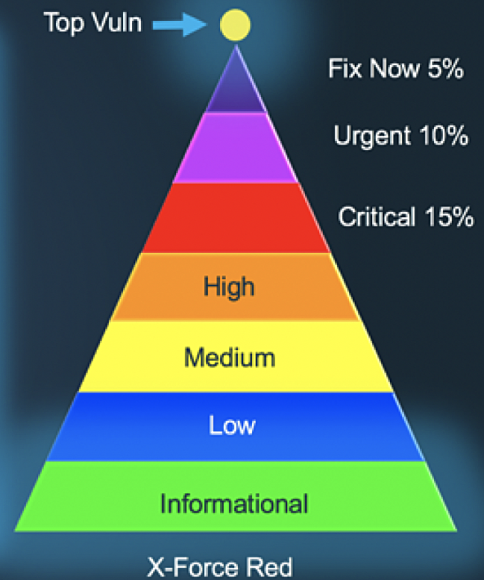 This image is from X-Force Red. It shows how X-Force Red VMS ranks vulnerabilities, with the most critical one being clearly stated on the top of the pyramid. The ranking is based on if the vulnerability is being weaponized, value of the exposed asset and criticality.

After a scan produces an extensive list of vulnerabilities, our proprietary analytics correlate the criticality, asset value and active exploits. We then automatically rank the vulnerabilities, prioritizing those that have been weaponized to expose a high-value asset. Whereas manual prioritization methods typically take four to five days to complete, our ranking is done within minutes, enabling remediation to begin immediately.

We apply that philosophy to every vulnerability we detect, and, based on its latest report, it’s clear Gartner shares that view.