Gootkit is complex multi-stage banking malware that was discovered for the first time by Doctor Web in 2014. Initially it was distributed via spam and exploits kits such as Spelevo and RIG. In conjunction with spam campaigns, the adversaries later switched to compromised websites where the visitors are tricked into downloading the malware.

Gootkit is capable of stealing data from the browser, performing man-in-the-browser attacks, keylogging, taking screenshots and lots of other malicious actions. Its loader performs various virtual machine and sandbox checks and uses sophisticated persistence algorithms. In 2019, Gootkit stopped operating after it experienced a data leak, but has been active again since November 2020.

Gootkit’s victims are mainly located in EU countries such as Germany and Italy. In this article we analyze a recent sample of Gootkit.

Gootkit consists of a (down)loader component written in C++ and the main body written in JS and interpreted by Node.js. The main body is a modular framework, containing registration, spyware, VMX detection and other modules.

The sample (MD5 97713132e4ea03422d3915bab1c42074) is packed by a custom-made multi-stage packer which decrypts the final payload step by step. The last stage is a shellcode that decrypts the original loader executable and maps it into memory. After mapping, the original entry point is called. Hence, we can easily unpack the original executable and analyze it. We detect the Gootkit loader with the verdicts listed in the table below.

Most of the strings are encrypted using XOR encryption and are decrypted at runtime. No other techniques are used to complicate static analysis. 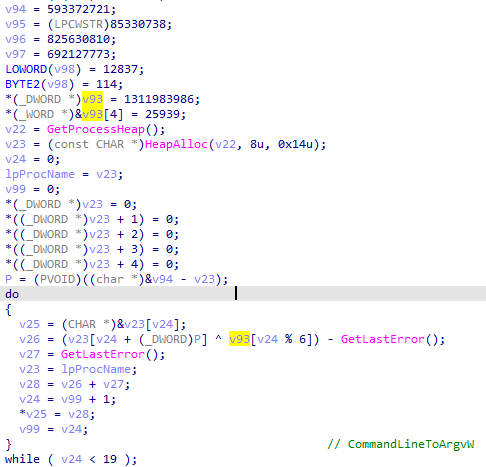 However, to make dynamic analysis more difficult, the Gootkit loader employs lots of different methods to detect virtual environments or debuggers. If any of the virtual machine checks succeed, the loader enters an infinite loop. 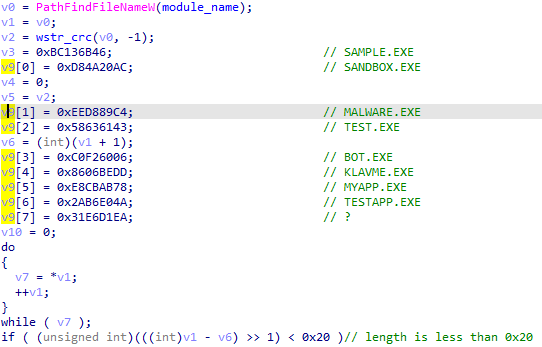 Full list of VM detection techniques used by the malware:

When the sample starts, it checks the command line arguments. The available arguments are listed below:

After the command line arguments are handled, the sample checks if it’s running inside a virtual machine or being debugged. If not, it decrypts the configuration and starts four threads.

Before downloading the main body from the C&C, the loader tries to find registry keys with the following format: HKCUSoftwareAppDataLow<pr_string>_<i>, where i is a number starting from 0 and pr_string is a pseudo-random string generated when the bot starts. Generation is based on the victim’s PC parameters, so the same value is generated for the same PC each time.

Each key contains a maximum chunk of 512,000 bytes (500KB) of encrypted data. If the aforementioned keys were found, their contents will be saved in a newly allocated buffer (used for decryption and decompression). The buffer is then decrypted using the same function used for decrypting the configuration, after which the buffer is decompressed.

After the unpacking routine, the loader will download the main body from the C&C, calculate its CRC32 and compare it with the registry payload CRC (if one exists). If the CRCs are different, the loader will execute the newer version downloaded from the C&C. The C&C server will not send the DLL module without the appropriate UserAgent header that is hardcoded into the sample. The current hardcoded value is: Mozilla/5.0 (Windows NT 6.1; Win64; x64; rv:25.0) Gecko/21006101 Firefox/25.0. 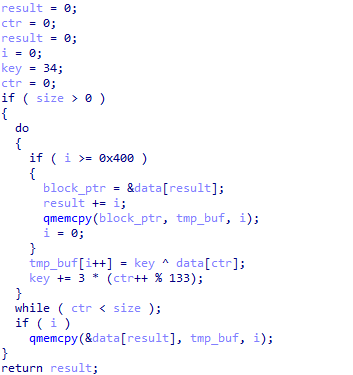 Information about the embedded modules is stored in an array of special file structures that have the following format: BYTE* name_pointer, BYTE* encrypted_data, DWORD data_size, DWORD encr_flag. These structures are used within the decryption routine that reads data_size bytes starting from encrypted_data. This routine decrypts encrypted_data if encr_flag is set and writes the result into a file with name *name_pointer. The decryption routine iterates over all entries in the file information array. Then the decryption execution is transferred to the Node.js interpreter.

When the malware finds a C&C server, it launches an infinite loop that listens to different internal malware events (some routines like cookie collection start without C&C request upon bot startup) and sends the collected data to the C&C via special formatted packets. The malware also listens to the C&C commands and invokes the appropriate handler on each command. To communicate with the modules, the malware uses following packet types:

There are six types of internal event handlers and corresponding packet formats.

The general packet structure is as follows: 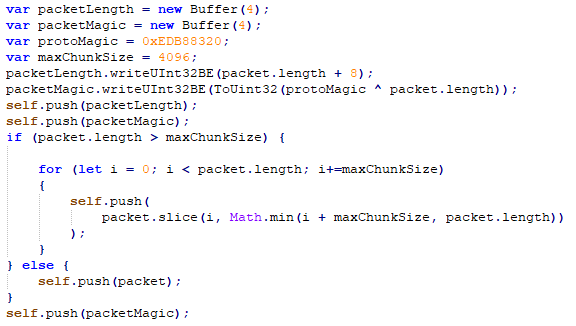 Kaspersky products detect this family as Trojan-Downloader.Win32.Injecter, HEUR:Trojan.Win32.Generic, Trojan-Downloader.Win32.Gootkit, Trojan-Banker.Win32.Gootkit. All the details, IoCs, MITRE ATT&CK Framework data, Yara rules and hashes related to this threat are available to the users of our Financial Threat Intelligence services. To learn more about threat hunting and malware analysis, check out expert training by Kaspersky’s GReAT.